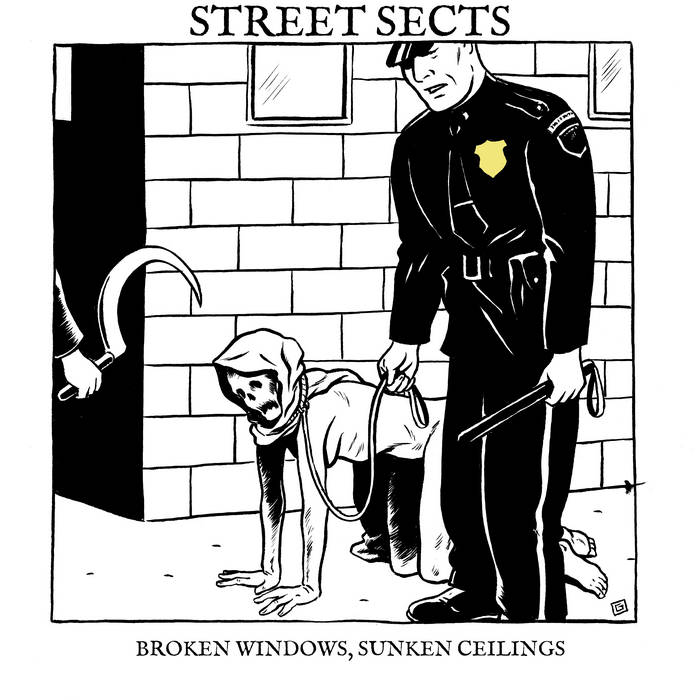 Dillon Dix Street Sects are quite honestly the greatest Industrial band to come up in the last decade, and they have more than enough potential to become one of the greatest that there has ever been. Favorite track: Gash Addict.

Steven Gullotta A small EP that has since grown on me. I can't get enough of Street Sects.

Danzig II but a cat

Give Me Goat, Or Give Me Death

Do I ever fantasize about the violence of my youth? It depends on what you mean. Sometimes, when I’m in the box and I can’t sleep, I’ll do this thing where instead of counting sheep, I’ll count the men that have been inside my mother. The ones I know about, anyway. That always ends with me thinking about my first erection. Mine came pretty late, I guess. I was about fifteen…I remember stumbling half asleep in the middle of the night from my bedroom to the kitchen for a glass of water when I found my mother naked and passed out drunk on the couch where that weekends one night stand had left her. Her Denny’s uniform was crumpled on the floor, and her legs were spread slightly open. The room was softly lit from an old lamp she’d pulled out of a neighbor’s trash about a month after we’d moved into the dump, and something about that low lighting and the dark outline of pubic hair above her slit quickened my pulse and got my blood pumping. Got it pumping the way it would right before a fight. I just stood there, staring at her while she snored, feeling the heat rising inside of me, feeling and listening to the pounding of my heart while the monster grew...the next day after school pounding my older cousin’s face to shit because he’d been running his mouth about what we’d done to that D.A.R.E. officer and his wife about a month back. We’d done it to pay him back for bracing one of our corner boys with a sack lunch and a pep talk about skipping school and hanging around with “born losers” like us. What he was really doing was trying to break him down, make him ashamed of who he was. We bought some cheap dime store pig masks, the kind with the rubber band that went around your head, covering your face but leaving the back of your head exposed. I remember it was a Sunday night, and he and his wife were eating dinner when we got there. We crept around the back and let ourselves in through the door by the kitchen, which was unlocked. We beat them to the floor with stolen police batons we’d brought with us, and then gagged them both. Then I held him at gunpoint while my two cousins taunted his wife, saying how they were going to fuck her like she’d never been fucked before. I knew that neither one of them had balls to do it, though. Instead they settled for some groping and baton-prodding, taking turns pissing on her and finishing by scraping the remains of their dinner plates onto her, smearing gravy and mashed potatoes into her face while screaming and barking at her like dogs. I remember my cousin Johnny saying “This is America, cunt. Get fat on it.” It was all pretty weak stuff, especially compared to some of the shit we did later that summer. I never even touched the woman. Didn’t want to. I just wanted to watch the look on her husband’s face while it all went down.
It wasn’t worth the heat it brought. Because of that night there were cops on every corner and shakedowns every hour for the next fucking year, it seemed like. Still, it sent a message.
I mean, how could you be so fucking condescending?
You don’t know us.
You can’t even begin to imagine.
I remember my second erection, too. It was basically just a memory of the first one, and since then they’ve all kind of been like that. Just a replay running up top while the thing downstairs repeats the movement. I was sitting in French class, sophomore year, flunking my way through another final. I remember the air conditioner in the school was broken. It was right before summer vacation and I was hung over. It was so fucking hot in that classroom I thought I was going to pass out. There was a girl from my neighborhood sitting two seats up and a row over from me. There were dark circles of sweat spreading under her arms and I could see her purple bra through her pale yellow shirt. It wasn’t the bra that got me hard, though. It was the dark wet circles. It made me think of that night when I’d found my mother laying with her legs open, the light too low and wrong for me to get a good look at it, but good enough for me to know that it was wet and dark.
The hole that I came screaming out of was wet and dark, and I want to go back.
Do I ever fantasize about the violence of my youth?
No.
I fantasize about going home.

Part two of five in "GENTRIFICATION: A SERIAL ALBUM"

Bandcamp Daily  your guide to the world of Bandcamp

Benji B talks about his new compilation ‘Deviation Classics’